The notion of the end of the world is terrible, but witnessing the absolute worst-case scenario play out on screen can be exhilarating and therapeutic. For example, it’s no surprise that the pandemic thriller “Contagion” (with Gwyneth Paltrow) was everyone’s must-see rental in 2020 since the film helped us digest the real-life disaster. Pandemics, as well as climate change disasters, zombie hordes, aliens bent on world dominance, and meteors blasting towards Earth, are all common themes at end of the world movies. Many of the finest apocalyptic films, though, include calmer moments: an inquisitive robot watches a seedling grow in an abandoned dump; a fearful family enjoys a dead-silent meal; the last pregnant woman on Earth oars a boat towards a bright future. There’s a comedy or beauty in the thought that humanity’s time is up and catastrophe is approaching for every nightmare-inducing disaster picture about the end times.

The Best End of the World Movies

Here are 25 of the finest end of the world movies, ranging from family-friendly animation to dark drama. 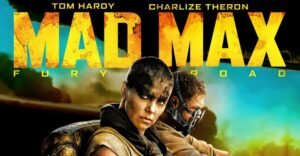 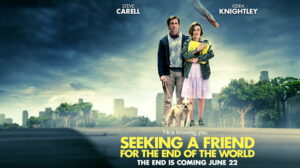 Lorene Scafaria’s directorial debut opens with the announcement that a meteor will wipe out all life on Earth in three weeks. Scafaria uses the impending end of the world to explore how people think about love and relationships through the eyes of two strangers thrown together: Steve Carrell as a middle-aged man whose wife has abruptly left him, and Keira Knightley as a restless young woman desperate to reunite with her family in England. 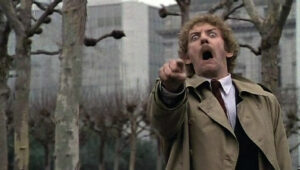 The fact that your lover isn’t acting like themselves might be the first indicator of the end times. Philip Kaufman’s terrifying adaptation of the 1956 “pod people” classic posits a completely different sort of pandemic: one in which people are gradually replaced by their identical counterparts as they sleep, making it hard to distinguish between friends and loved ones. The viral GIF of celebrity Donald Sutherland pointing and yelling will be most familiar to younger people. 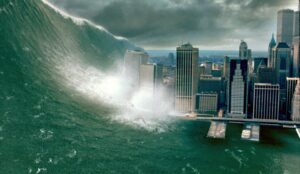 Released the same summer as Michael Bay’s cheesy mega-blockbuster Armageddon, Mimi Leder’s disaster film has essentially the same plot: a meteor is hurtling towards Earth and threatens to knock out the entire human race unless a group of heroic astronauts can save it. The film is huge, crazy, popcorn-eating fun, and it has an Aerosmith song. But if you’re interested in how an “extinction-level event” might actually go down, Leder’s film is more accurate, bringing strong character drama and real science to the big explosions and space scenes. It’s also notable as the first film in which Morgan Freeman plays the President of the United States. 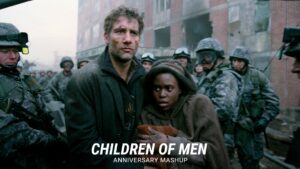 Alfonso Cuarón’s tense and elegant thriller, a critical darling and triple Oscar nominee, brought prestige to the post-apocalyptic sci-fi genre. In the hellscape that London has become after a worldwide infertility crisis, a jaded former activist (Clive Owen) must protect the first pregnant woman in eighteen years (Clare-Hope Ashitey) as she attempts to flee the country. 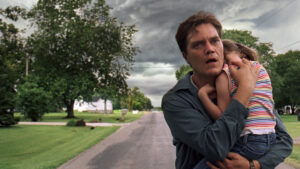 At what point does preparing for the worst become a psychosis? Michael Shannon gives one of his most haunting performances as a blue-collar dad who becomes obsessed with building the perfect storm shelter after experiencing dreams and hallucinations about a coming climate catastrophe. Whether you’re a doomsday prepper or an optimist, the ending will knock the wind out of you. 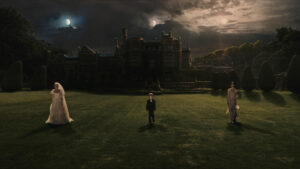 For people suffering from depression, the world can feel like it’s always on the verge of ending – and worse, everyone else seems oblivious. Kirsten Dunst gives a barnburner of a performance as a young bride battling depression in Lars Von Trier’s lush, operatic drama, while a planet called Melancholia threatens to collide with Earth. As the Cold War ramped up during the Reagan era, a number of films tried to realistically portray the worst-case scenario of an imminent nuclear attack. Among the films that traumatised a generation are the horrific Threads (1984) and the emotional family drama Testament (1983)—but the most impactful, far and away, was this made-for-television drama from Star Trek II: The Wrath of Khan director Nicholas Meyer. Nearly 100 million viewers tuned in to watch the bombs fall on a cast of middle-class characters, and the film reportedly influenced Reagan’s nuclear policies. 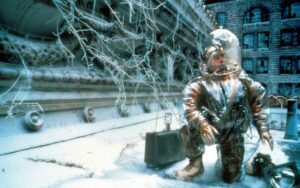 Bruce Willis is the star, but Brad Pitt steals the film as Jeffrey Goines, a charismatic, mentally ill conspiracy theorist who may hold the secret to preventing a deadly plague in Terry Gilliam’s wild, tragic sci-fi drama. 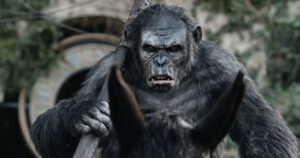 Both the original and rebooted Planet of the Apes franchises offer plenty of apocalyptic delights, including the famous last shot of the 1968 film and the clever role-reversal of 1971’s Escape from the Planet of the Apes (in which intelligent apes land on a human-occupied Earth, rather than vice-versa). But the most unforgettable cinematic portrayal of our post-human future can be found in Matt Reeves’ second Apes film, in which stunningly realistic motion-capture primates (including Andy Serkis as Caesar the chimpanzee) wage war with the few remaining humans in decimated San Francisco.

Pixar’s unique sci-fi film unfolds in a desolate setting: the trash heaps that remain on Earth after humanity has destroyed the natural world and fled. The robot of the title finds his soul through an abandoned VHS copy of the film Hello, Dolly! and eventually gets drawn into a space-hopping adventure—but it’s the film’s near-wordless opening sequence that stays with you.

Darren Aronofsky got a lot of flack for his bold take on one of humanity’s original end-of-the-world stories: the tale of Noah’s ark. The writer-director is mostly faithful to the ancient Hebrew text (including odd details like Noah’s drunkenness), layering on spectacular visual effects and conflicted inner lives for the patriarch (Russell Crowe) and his isolated family. It won’t please everyone, but as filmed Biblical epics go, it’s one of the most engaging. 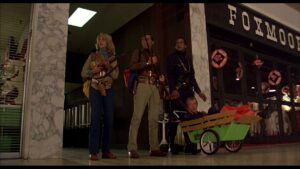 This is how the world ends: not with a bang, but with an abandoned shopping mall in Pittsburgh. Zombie auteur George Romero’s long-gestating sequel to Night of the Living Dead, in which a small group of survivors attempt to fend off an undead invasion while enjoying what’s left of the mall, is a bloody, entertaining satire with a strong critique of consumerism. Unfortunately, it’s a lot harder to find right now than Zack Snyder’s inferior 2004 remake. (Hint: look on YouTube.) 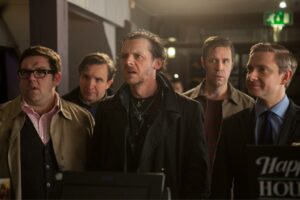 A dark comedy about the dangers of living in the past, Edgar Wright’s film follows a group of high school friends (including Simon Pegg and Nick Frost) who reunite for one last pub crawl in their dead-end hometown—only to find themselves caught up in a sinister extraterrestrial takeover. 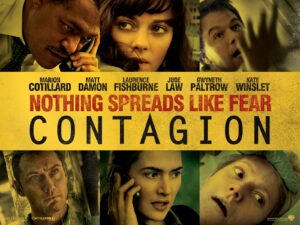 Steven Soderbergh’s pandemic drama achieved a new resonance in 2020, but it was terrifying to begin with—a haunting chronicle of complete societal collapse that takes its all-star cast to hell and back. (The director is reportedly working on a sequel.)

Deeply mysterious and disturbing, Alex Garland’s haunting sci-fi horror film sends a group of female soldiers (Natalie Portman, Jennifer Jason Leigh, Gina Rodriguez, Tessa Thompson, Tuva Novotny) into a vision of the world’s end like no other: an alien zone called the “Shimmer,” where plants take over human bodies, animals mutate into deadly hybrids, and anyone who enters will end up facing their darkest selves (literally).

The best of the four films adapted from Suzanne Collins’ YA trilogy, Catching Fire presents the end of the world as a reality-TV nightmare: an endless competition thick with manipulation where no one ever truly wins. Jennifer Lawrence is riveting as Katniss Everdeen, the girl who challenges her country’s tradition of forcing peasants into a deadly spectator sport—and uses a really great dress to foment a revolution. 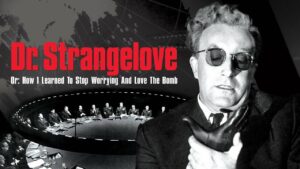 Inspired by a very particular time and place in U.S. history, Stanley Kubrick’s bleak, hilarious satire seems to grow more relevant with every decade. This frantic chronicle of military and political officials scrambling to prevent (or capitalise on) an accidental nuclear war, this comedy (starring Peter Sellers in a legendary triple-role performance), captures not just the anxiety and paranoia of the Cold War, but the absurdity of it as well. 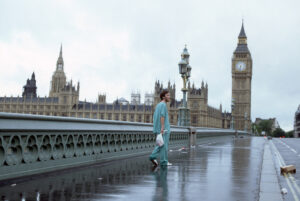 Danny Boyle’s empathetic horror drama begins 28 days after a zombie virus is unleashed on the world, with a hospitalised Cillian Murphy waking up to a decimated, abandoned London. Upon its release, the movie was embraced as a cinematic response to the trauma of September 11, a day that really did feel like the end of the world for many Americans. Although the British film ushered in a whole new era of zombie entertainment, it stands apart because of its believable characters and surprisingly hopeful conclusion. 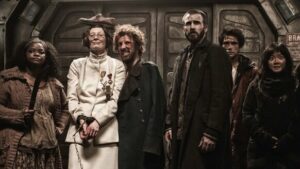 Seven years before winning the best picture and best director Oscars for his Korean-language thriller, Parasite, director Bong Joon-ho brought us this fast-paced action film with a novel vision of the world’s end. After scientists trying to stop global warming inadvertently triggering a new ice age, the world’s remaining humans are confined to an enormous train that runs endlessly around the globe, where they are rigidly divided by class. Chris Evans stars as a passenger who leads a revolution from the poorest section of the train, but it’s Tilda Swinton’s offbeat performance as the train’s official spokesperson that steals the film. What does it feel like to be the last family in the world? John Krasinki’s anxiety-inducing thriller gives us a pretty good idea. Starring the Office alum and real-life wife Emily Blunt, the surprise-hit horror film takes place in a near-future where most of humankind has been killed by monstrous alien invaders, who are blind but have a super-sensitive hearing. To survive in desolate upstate New York, the couple and their children try to live in complete silence – even during the harrowing birth of a new child. 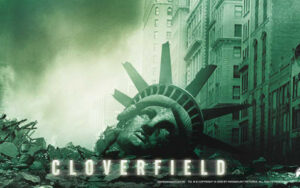 A chilling vision of the apocalypse shown entirely through found footage, Matt Reeves’ alien-invasion thriller (produced by J.J. Abrams) gets terrific mileage from the Jaws technique of keeping its monster largely unseen. The shaky cam can make a person woozy, but the striking images of New York City under siege—the Statue of Liberty’s head rolling into the street, the Brooklyn Bridge collapsing—will stay with you. 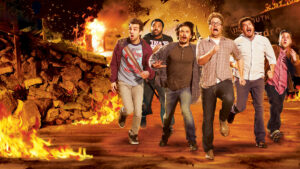 This true Hollywood oddity portrays the Biblical end times occurring during a celebrity-studded party at James Franco’s Hollywood home. All the actors (including co-director and screenwriter Seth Rogen, Jonah Hill, Michael Cera, Emma Watson, and Craig Robinson) play cringe-y versions of themselves, as the apocalypse drives them to cannibalism, murder, and drinking their own pee. If you can make it to the end, you’re rewarded with a vision of heaven that any ‘90s pop fan will appreciate.